Roman Breviary: in English, in Order, Every Day for May 2012


The third Nocturn consists of a homily on the Gospel which is read at that day's Mass. Covering a great stretch of time and space, they do for the worshipper in the field of church history what the Scripture readings do in that of biblical history. 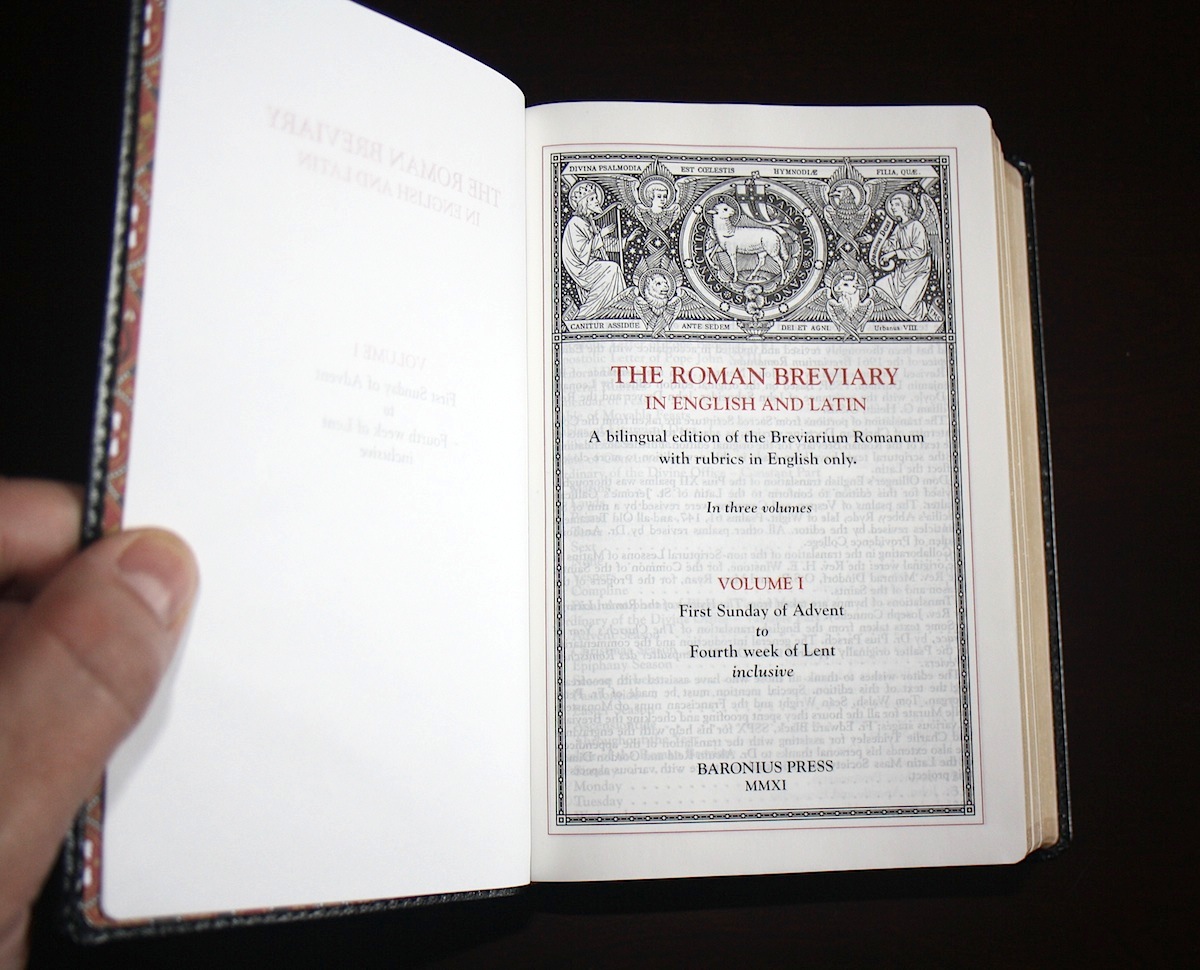 These offices are of very ancient date, and many of them were probably in origin proper to individual saints. They contain passages of great literary beauty. The lessons read at the third nocturn are patristic homilies on the Gospels, and together form a rough summary of theological instruction. Each of the hours of the office is composed of the same elements, and something must be said now of the nature of these constituent parts, of which mention has here and there been already made.

They are: psalms including canticles , antiphons, responsories, hymns, lessons, little chapters, versicles and collects. Before the reform, the multiplication of saints' festivals, with practically the same festal psalms, tended to repeat the about one-third of the Psalter, with a correspondingly rare recital of the remaining two-thirds.


Following this reform, the entire Psalter is again generally recited each week, with the festal psalms restricted to only the highest-ranking feasts. The antiphons are short liturgical forms, sometimes of biblical, sometimes of patristic origin, used to introduce a psalm. The term originally signified a chant by alternate choirs, but has quite lost this meaning in the Breviary. The responsories are similar in form to the antiphons, but come at the end of the psalm, being originally the reply of the choir or congregation to the precentor who recited the psalm.

The hymns are short poems going back in part to the days of Prudentius , Synesius , Gregory of Nazianzus and Ambrose 4th and 5th centuries , but mainly the work of medieval authors. The lessons, as has been seen, are drawn variously from the Bible, the Acts of the Saints and the Fathers of the Church. In the primitive church, books afterwards excluded from the canon were often read, e.

In later days the churches of Africa, having rich memorials of martyrdom, used them to supplement the reading of Scripture. Monastic influence accounts for the practice of adding to the reading of a biblical passage some patristic commentary or exposition. Books of homilies were compiled from the writings of SS. Augustine , Hilary , Athanasius , Isidore , Gregory the Great and others, and formed part of the library of which the Breviary was the ultimate compendium.

In the lessons, as in the psalms, the order for special days breaks in upon the normal order of ferial offices and dislocates the scheme for consecutive reading. The lessons are read at Matins which is subdivided into three nocturns. The versicles are short responsories used after the little chapters in the minor hours. They appear after the hymns in Lauds and Vespers.

The collects come at the close of the office and are short prayers summing up the supplications of the congregation. With the crystallization of church order improvisation in prayer largely gave place to set forms, and collections of prayers were made which later developed into Sacramentaries and Orationals. The collects of the Breviary are largely drawn from the Gelasian and other Sacramentaries, and they are used to sum up the dominant idea of the festival in connection with which they happen to be used.

Before , the difficulty of harmonizing the Proprium de Tempore and the Proprium Sanctorum , to which reference has been made, was only partly met in the thirty-seven chapters of general rubrics. Additional help was given by a kind of Catholic Churchman's Almanack, called the Ordo Recitandi Divini Officii , published in different countries and dioceses, and giving, under every day, minute directions for proper reading. Every cleric in Holy Orders, and many other members of religious orders, must publicly join in or privately read aloud i. In large churches where they were celebrated the services were usually grouped; e.

Matins and Lauds about 7. Lay use of the Breviary has varied throughout the Church's history. In some periods laymen did not use the Breviary as a manual of devotion to any great extent. The late Medieval period saw the recitation of certain hours of the Little Office of the Blessed Virgin, which was based on the Breviary in form and content, becoming popular among those who could read, and Bishop Challoner did much to popularise the hours of Sunday Vespers and Compline albeit in English translation in his Garden of the Soul in the eighteenth century.

The Liturgical Movement in the twentieth century saw renewed interest in the Offices of the Breviary and several popular editions were produced, containing the vernacular as well as the Latin. Bute's version is noteworthy for its inclusion of the skilful renderings of the ancient hymns by J. Newman, J. Neale and others. Several editions of the Pius X Breviary were produced during the twentieth century, including a notable edition prepared with the assistance of the sisters of Stanbrook Abbey in the s.

Two editions in English and Latin were produced in the following decade, which conformed to the rubrics of , published by Liturgical Press and Benziger in the United States. These used the Pius XII psalter. Baronius Press 's revised edition of the Liturgical Press edition uses the older Gallican psalter of St. This edition was published and released in for pre-orders only. In , the publication has resumed printing and is available on Baronius' website.

In , an i-breviary was launched, which combines the ancient breviaries with the latest computer technology. From Wikipedia, the free encyclopedia. That fact that the Hail Holy Queen was fiddled with in shows that this translation issue is not purely a post-Vatican II phenomenon.

Another tidbit: I recall the interim mass of the mid-sixties very well, since it came when I was just at the age a child starts paying attention to mass. That was the mass that I memorized. Our recent new translation went back to much of the language of that interim mass. One exception: in the Creed, where we now say "consubstantial with the Father", we used to say "of one substance with the Father.

No English translation is "de fide", much though we grow to love what is familiar. Should this eventually be re-translated as "forever and ever" I'll try to accept that gracefully. There is no Office of Readings, as it was not yet finished. Psalm 94 95 is used before every office. I gave my copy away. It has the Grail psalms. Before every office Psalm 94 95 is used as an introductory psalm. It has bits an pieces of the old calender, showing that the new calender was not quite finalized when this Calender was put together, so St.

Joachim is still by himself on August 16, the Motherhood of Mary is still on October 11,and so on. I kept this one, as it is an interesting liturgical artifact. The use of Psalm 94 95 , before every office reflects how the Benedictines started Lauds in those days with Psalm 66 67 and the Roman Breviary of used Psalm 94 95 before the Office of Matins. The move to put it before every office was deemed unsuccessful and so it stayed with the Office of Readings.

Regarding translation, I think a lot is personal preference.

When I first started praying the Office in , I used my grandfather's A Short Breviary of , which contained the Confraternity translation of the Vulgate psalms. I found the Grail awkward compared to these, but found the Olinger translation of the Pian Psalter very comfortable. Daria, the new LOTH will be an exciting thing. The translation of prayers will match what is in the mass I. We will have all the additional readings for new saints. There will be a three year cycle of antiphons for the Benedictus and the Magnificat. I am heard that there are Offices for Votive Masses, which will be provided.

The liturgical hymns proper to the office shall be provided. I am not sure, but I understand that the non-liturgical hymns will be removed, as well as the psalm prayers. Yes, I already have the new grail translation and like it very much. And I've been pasting the new collects into my breviary as a temporary fix. Where did you learn about the 3 year cycles of antiphons and offices for votive masses, and about the correct hymns being put in?

I hope you are right, about the hymns especially. It's so difficult to find any definite information about all this, so I'd appreciate whatever you can tell me, James. It has pictures of out and a review.

The reviewer bought the set from a priest on e-bay. I know the priest who sold it, and he, a former ICEL member gave me the info.